“Let the future tell the truth, and evaluate each one according to his work and accomplishments. The present is theirs; the future, for which I have really worked, is mine.” -Nikola Tesla- 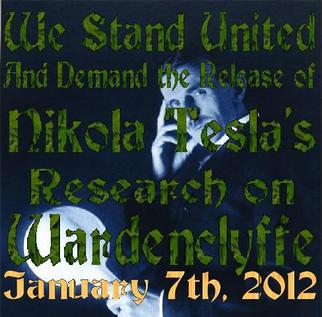 On January 7th 2012, the Anniversary of the death of one of history's most brilliant scientists, Nikola Tesla, we will stand together and demand his research into harnessing electricity from the ionosphere, at a facility called Wardenclyffe, be released to the public.

The Energy Crisis is a lie, the problem was solved 100 years ago by a scientist named Nikola Tesla.

He had discovered a way to harness the naturally occurring electricity from the ionosphere, and then in turn rebroadcast it to individual relay stations that could be placed anywhere and were no larger then your average car antenna.

Each primary tower could produce renewable, safe, clean electricity, and would then broadcast it wirelessly to points as far (as his experiments in Colorado springs showed) as 30 miles away from the primary tower.

Nikola Tesla's primary investor, J.P. Morgan, thought he was investing in the world's first radio tower, but unknown to him, that was only one of its purposes and capabilities.

The project was known as Wardenclyffe.

When JP. Morgan learned of the true capabilities of Wardenclyffe, the ability to harness an almost infinite amount of power and freely broadcast it wirelessly to anyone who had the proper antenna (with no way to monitor energy consumption) he immediately canceled all of Tesla's funding.

The pursuit of profit swept one of the worlds most revolutionary inventions ever conceived under the carpet, and away from the eyes of history.

Upon Nikola Tesla's death on January 7th, 1943, the U.S. Government immediately moved into his lab and apartment and confiscated all of his scientific research - including his work on Wardenclyffe and research on the ionosphere.

To this day, none of this research has been made public.
This is a clear example of how corporate greed has bought our government, instead of providing this information for the benefit of ALL mankind.
They have deliberately hidden it from public view in order to prop up corporations such as the oil, natural gas, coal, and nuclear power industries.

It is time we stop looking towards these horrible alternatives to Gasoline, all of them are poisoning the planet, and draining the economies of the world.

It is time we stand together and demand that Nikola Tesla's Research be released so that we can finally become a sustainable society.

On January 7th, 2012, the 69th anniversary of the loss of the Brilliant scientist Nikola Tesla, we will DEMAND that we stop being lied to.

We must work in the present, with an eye on our past, to build a future we can be proud to give our children. 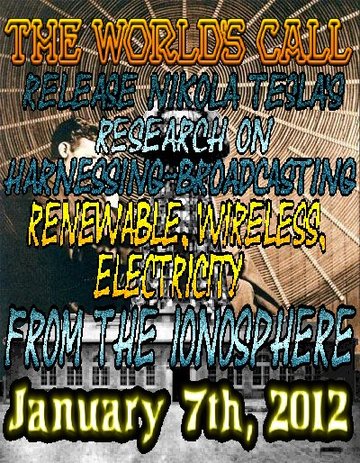 In 1891, Nikola Tesla gave a lecture for the members of the American Institute of Electrical Engineers in New York City, where he made a striking demonstration. In each hand he held a gas discharge tube, an early version of the modern fluorescent bulb. The tubes were not connected to any wires, but nonetheless they glowed brightly during his demonstration. Tesla explained to the awestruck attendees that the electricity was being transmitted through the air by the pair of metal sheets which sandwiched the stage. He went on to speculate how one might increase the scale of this effect to transmit wireless power and information over a broad area, perhaps even the entire Earth. As was often the case, Tesla’s audience was engrossed but bewildered.

In essence, Tesla’s global power grid was designed to “pump” the planet with electricity which would intermingle with the natural electric currents that move throughout the Earth’s crust and oceans. At the same time, towers like the one at Wardenclyffe would fling columns of raw energy skyward into the electricity-friendly ionosphere fifty miles up. To tap into this energy conduit, customers’ homes would be equipped with a buried ground connection and a relatively small spherical antenna on the roof, thereby creating a low-resistance path to close the giant Earth-ionosphere circuit. Oceangoing ships could use a similar antenna to draw power from the network while at sea. In addition to electricity, these currents could carry information over great distances by bundling radio-frequency energy along with the power, much like the modern technology to send high-speed Internet data over power lines.

his supporting experimental data and previous engineering accomplishments, there was little reason to doubt the veracity of Tesla’s claims. But building the power station, the huge wooden tower, and the fifty-five ton conductive dome depleted the original investment money relatively quickly, leading to chronic funding shortages. The complications were further compounded by a stock market crash in 1901 which doubled the cost of building materials and sent investors scurrying for financial cover.

The Wardenclyffe team tested their tower a handful of times during construction, and the results were very encouraging; but the project soon devoured Tesla’s personal savings, and it became increasingly clear that no new investments were forthcoming. In 1905, having exhausted all practical financial options, the construction efforts were abandoned. Regarding the project’s demise, Tesla stated:

“It is not a dream, it is a simple feat of scientific electrical engineering, only expensive — blind, faint-heated, doubting world!  Humanity is not yet sufficiently advanced to be willingly led by the discoverer’s keen searching sense. But who knows? Perhaps it is better in this present world of ours that a revolutionary idea or invention instead of being helped and patted, be hampered and ill-treated in its adolescence — by want of means, by selfish interest, pedantry, stupidity and ignorance; that it be attacked and stifled; that it pass through bitter trials and tribulations, through the strife of commercial existence. So do we get our light. So all that was great in the past was ridiculed, condemned, combated, suppressed — only to emerge all the more powerfully, all the more triumphantly from the struggle.”
-Nikola Tesla

If Tesla’s plans had come to fruition, the pilot plant would have been merely the first of many. Such “magnifying transmitter” towers would have peppered the globe, saturating the planet with free electricity and wireless communication as early as the 1920s. Instead, the futuristic facility’s potential went untapped for over a decade, until the tower was finally demolished for salvage in 1917.

When a child is born its sense-organs are brought in contact with the outer world.The waves of sound, heat, and light beat upon its feeble body, its sensitive nerve fibers quiver, the muscles contract and relax in obedience: a gasp, a breath, and in this act a marvelous little engine, of inconceivable delicacy and complexity of construction, unlike any on earth, is hitched to the wheel-work of the Universe.The little engine labors and grows, performs more and more involved operations, becomes sensitive to ever subtler influences and now there manifests itself in the fully developed being - Man - a desire mysterious, inscrutable and irresistible: to imitate nature, to create, to work himself the wonders he perceives.
Inspired in this task he searches, discovers and invents, designs and constructs, and enriches with monuments of beauty, grandeur and awe, the star of his birth.He descends into the bowels of the globe to bring forth its hidden treasures and to unlock its immense imprisoned energies for its use.He invades the dark depths of the ocean and the azure regions of the sky. He peers into the innermost nooks and recesses of molecular structure and lays bare to his gaze worlds infinitely remote. He subdues and puts to his service the fierce, devastating spark of Prometheus, the titanic forces of the waterfall, the wind and the tide.He tames the thundering bolt of Jove and annihilates time and space. He makes the great Sun itself his obedient toiling slave.Such is the power and might that the heavens reverberate and the whole earth trembles by the mere sound of his voice.
What has the future in store for this strange being, born of a breath, of perishable tissue, yet immortal, with his powers fearful and divine? What magic will be wrought by him in the end? What is to be his greatest deed, his crowning achievement? Long ago he recognized that all perceptible matter comes from a primary substance, of a tenuity beyond conception and filling all space - the Akasa or luminiferous ether - which is acted upon by the life-giving Prana or creative force, calling into existence, in never ending cycles, all things and phenomena.The primary substance, thrown into infinitesimal whirls of prodigious velocity, becomes gross matter; the force subsiding, the motion ceases and matter disappears, reverting to the primary substance.
Can Man control this grandest, most awe-inspiring of all processes in nature? Can he harness her inexhaustible energies to perform all their functions at his bidding, more still - can he so refine his means of control as to put them in operation simply by the force of his will? If he could do this he would have powers almost unlimited and supernatural. At his command, with but a slight effort on his part, old worlds would disappear and new ones of his planning would spring into being.He could fix, solidify and preserve the ethereal shapes of his imagining, the fleeting visions of his dreams.
He could express all the creations of his mind, on any scale, in forms concrete and imperishable. He could alter the size of this planet, control its seasons, guide it along any path he might choose through the depths of the Universe. He could make planets collide and produce his suns and stars, his heat and light. He could originate and develop life in all its infinite forms.To create and annihilate material substance, cause it to aggregate in forms according to his desire, would be the supreme manifestation of the power of Man's mind, his most complete triumph over the physical world, his crowning achievement which would place him beside his Creator and fulfill his ultimate destiny.
Powered by